Tripoli and the Grand Prix

I went to Libya several times, but the first time was in the late seventies. King Idris Al Senussi, dethroned by a coup d’état of Captain Gaddafi about ten years earlier, was living in exile in Cairo, the Italians were driven away and the country was in a rather delicate social and political status.
But for a number of reasons I was not worried at all, only very excited about this slightly “different” trip.

As a child, with my brother and maternal grandparents, I had spent a few summer holidays in the Highlands of Arcinazzo, near Subiaco, in the farm of the former Marshal of Italy, Rodolfo Graziani, Governor of Libya during the Fascism era, whose iron fist administration was able to bring together the various tribes and local ethnic groups unconsciously facilitating the task to Gaddafi thirty years later. He was an imposing and charismatic person with a lot of white hair, constantly followed by two very faithful askaris in their traditional garments and by two little dogs, also very white.
For us children he was a demigod with his safary jacket and the stories he told us, which carried us into the desert among caravans of camels and furious fights in the dunes against the rebel Touaregs.

My father had met him in Libya, where he spent and worked several years before the war, travelling far and wide through the country he knew very well. His stories, full of nostalgia, were always fascinating and exciting, stirring my imagination; he told us of imposing Roman ruins and great oases, then the desert, the rock graffiti of Fezzan, the Grand Prix of Tripoli… in short, I was very curious for years and I really wanted to go and see for myself. But it was not so easy.

The occasion came unexpectedly from ENI, which offered me the role of “observer” of the local policies for a short time. I had to meet some notable figures and the entourage of a man called… Patrizio! Gaddafi’s code nome.
The communications, then entrusted exclusively to the teletypewriters or SNAM radio links of the ENI installations, were not at all secure and it was necessary to use preset codes. Which, moreover, everyone understood without effort! 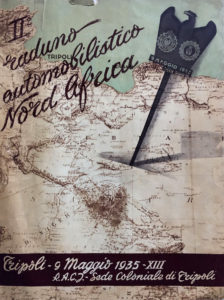 At the Tripoli airport, after endless checks, our driver (a spy), brought me with absolute priority and despite the protests, to the Mellaha racetrack, between the salt pans and the Tagiura Oasis.
As a nostalgic lover of Alfa Romeo cars, I admit that I was moved. There were still the ruins of the tower where the timekeepers stood and part of the stands and, above all, closing my eyes, I was able to hear the powerful roar of the engines and the voice of the people along the track while the faces of the drivers and all the old yellowed photos, which I had seen many times in my collection and thus still very clear in my mind, were magically coming to life. Nuvolari, Varzi, Taruffi, all the mechanics, the authorities: everyone was still there enthusiastic and happy, unaware of what would happen soon.

Every business meeting, every dinner, whether official or not, was a reason to seek information, memories, finds of those distant motor-sports epic events.

Tripoli was a beautiful city, exactly as my father had described it. Very similar to Latina or Sabaudia, certainly much bigger and richer, but with the same style of the ventennio. Tree-lined boulevards and arcades protecting from the sun and from the rain, elegant liberty-style coffee bars and many shops and buildings with signs still showing Italian names but now in very different hands. How much melancholy then and how much sadness today to see in ruins, destroyed by the recent fighting, all the beauty that the Italians had hardly built over ten years and then quickly abandoned.

I also went to visit the Bishop of Tripoli, a very kind Franciscan, very tall, slim and with a beautiful beard, Brother Michael I think he was his name, a man who became my friend. His presence was tolerated more because of his hospital and good work than for his faith, which was in any case immense. A young priest who was with him (he cooked spaghetti with tomatoes and delicious vegetables), after learning about my passion for cars and old things, accompanied me to a sort of garage storage under the Curia where, among paintings and statues of saints, crucifixes of all kinds and various altars originating from churches turned into mosques, lifted dusty sheets from a few cars: a Fiat 522 dating back to the thirties, a Lancia Aprilia, a 600 and a couple of Moto Guzzi. But behind them I immediately noticed a crate with very faded red Alfa Romeo wordings and inside it a new 6C 1750 Turismo engine! ….. whose story, adventurous and still “current”, I told here.

Who knows what happened to all those items today, many of which were left to the Church by the Italians driven away, perhaps with the hope of recovering them later. I remember a large, beautiful nineteenth-century painting with a view of Naples from Capri ….
ENI made available to me an Alfa Romeo Giulia sedan with which I drove several times on some stretches of the old Mellaha racetrack that had survived, near the former American base whose airport used the fast straight stretch, and with the Giulia in my free time I traveled to Leptis Magna, the birthplace of Settimio Severo and to Sabratha, Cyrene and then to the great oases, traveling alone or together with Enrico Boetani, a colleague from Montedison, carrying the green book always in my pocket and every authorization of the local authorities, including the fundamental one of Abdelsalam Jallud, then right-hand man of Gaddafi, with whom I established good relations. 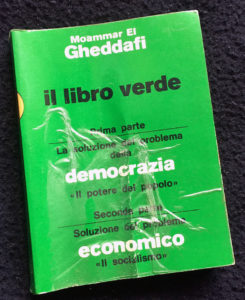 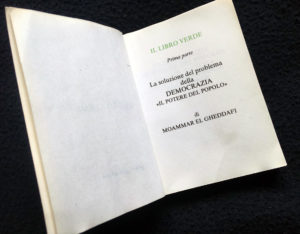 A rich and wonderful country recently returned to barbarism and divided by the short-sighted and foolish policy of some European countries supported by absolute and uneducated American blindness “to support freedom and the Arab revival” which, indeed, had arisen in a destructive way!

0 0 vote
Article Rating
Condividi su:
And Der Teufel became a legend… Cerda… once upon a time