It happened 70 years ago…

The 159. Nothing to do with the sedan produced by Alfa Romeo from the 2005 to 2011, a direct descendant of the 156 which, differently of this one, despite taking up the beautiful lines designed by Walter de’ Silva, was enormously successful. However, perhaps to ennoble it commercially, was given a truly mythical name: 159, like the Alfetta winner of the F1 World Championships of 1950 and 1951 with Nino Farina and Manuel Fangio.

An extraordinary racing car not so much for the mechanics, conventional enough for the times, but rather for the legend contained in the brand it represents and for the victories and the joy that Alfa returns to the country and to the Italians, both massacred from the just finished second world war. In truth, the world, literally destroyed, had come out very struck by a long and disastrous conflict not only for men but also for the industries and sport itself. After the war, no car manufacturer was therefore able to bring out a modern and competitive car; Alfa Romeo managed to do it, miraculously hiding and saving some pre-war “Alfetta” 158 from the looting of fleeing Germans and from the incoming allies. The 158, short for 1500 and 8 cylinders, were conceived in 1937 in Modena by Scuderia Ferrari, which still managed the experience and sport department of Alfa Romeo, with the team principal Enzo Ferrari and the designers Gioacchino Colombo and Alberto Massimino. The car, with a chassis with tubular side members and sheet metal cross members, weighed about 630 kg and it had a supercharged engine with a Roots volumetric compressor for a power of about 250 horsepower at 7.000 rpm. The car, driven by Emilio Villoresi, Gigi’s brother, was immediately successful on its first outing in the race at the Coppa Ciano of Livorno in the 1938 August; the car registration was made directly by the Scuderia del Portello through the company’s new sports department, Alfa Corse, just organized by the General Manager Ugo Gobbato who had just liquidated, in all senses, Enzo Ferrari.

At the end of the war the Alfa, which unfortunately had suffered heavy bombing in 1943 and was producing gas cookers and window frames, taken out his racing cars and in particular, the Alfetta 158 resumed in a warehouse in Milan and even from a pigsty in Melzo, near Milano, where they had been hidden for the entire war period. The cars, updated and improved, were immediately competitive; the power gradually increased from 250 to over 400 horsepower at the incredible rpm of 9.000, delivered by the 159 in the 1951 version with speed peaks of over 300 km/h. Obviously the car was adapted to the greater powers of the engine with changes to the braking system with the four huge drums, to the chassis, the bridge and the suspensions. In addition to Villoresi, there were numerous drivers who followed each other driving this magnificent car, obtaining success everywhere: Jean Pierre Wimille, Achille Varzi, Carlo Felice Trossi, the test driver Consalvo Sanesi, Alberto Ascari, Piero Taruffi and also … the actor Amedeo Nazzari, protagonist with Alida Valli in 1951 of the film “L’ultimo incontro” by Gianni Franciolini where, in truth, the real protagonists were the roaring engines of the 159 lead by Sanesi, Farina, Fagioli, Fangio, Bonetto. 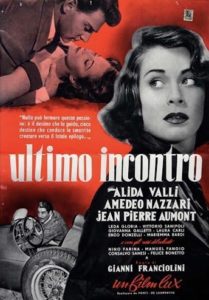 In 1950, under the aegis of the FIA and with new regulations, the F1 World Championship starts which will also assign the title to the winning drivers. The first race, which took place in England, with the presence of King George VI, father of the current queen, saw the absolute dominance of Alfa Romeo; absent instead Ferrari because he believed that the engagement was too low. The 158/159 conquered the first four places with Farina, Fagioli, Fangio and Parnell. The team had been completely renewed, in addition to the “tested” Farina and Fagioli, the Argentine driver Fangio (the team of the three F) was also added, a driver who was no longer young but strongly supported by Varzi who had also made a house available to him, and also Reg Parnell in homage to the host nation. The Alfa cars were unrivaled for the entire season, winning six out of seven Grands Prix and Nino Farina became the first F1 World Champion.

In 1951 the Alfa lined up an improved car in power, drive ability and above all speed, the 159, perfect and latest evolution of the 158. The debut actually took place officially at the end of the previous season and exactly in Monza for the XXI ° Grand Prix of Italy won by Nino Farina while for the following year the 159, now squeezed to the max, struggled a lot to maintain their supremacy pursued more and more by the Ferrari. However they managed to win the Manufacturer and Drivers World Championship in 1951 and, after a successful season, Alfa, burdened by a heavy economic and trade union situation, as per its tradition, announced the official withdrawal from the F1 competitions to devote exclusively to the production car series.

Ferrari will conquer its first F1 World Championship in 1952 with the 500F2 driven by Alberto Ascari. Enzo Ferrari replied thus in the congratulatory telegram sent by Alfa:

“August 1952. Dear Alfa Friends, allow me to begin this letter that I am writing to you after so many years. Your telegram today brought me a breath of spring and in the clear sky I read, with disconcerting clarity, the entire book of our memories. Twenty years I have lived with you; how many facts, events, men have passed! I remembered everything and everyone today. I still have for our Alfa, rest assured, the adolescent tenderness of the first love, the immaculate affection for the mother! Believe me. Your Enzo Ferrari”.
(I wanted to bring Ferrari’s letter in purple, the color of each of his writings).

Alfa will reappear on F1 tracks twenty years later, in 1971, with the only supply to the March of 8 cylinders engines derived from 33/3 prototypes (drivers: De Adamich and Nanni Galli). We have to wait until 1975 to review an Alfa F1 on the track, the Brabham-Alfa Romeo BT45 powered by the 12 cylinders boxer, a car conceived by Gordon Murray and Carlo Chiti, director of the Autodelta, the sports department of the Milanese company (drivers: Carlos Pace and Carlos Reutemann).

Returning to the 158/159 it is interesting to know that its fuel was not the usual petrol but a particular and rather complex mixture studied and tested on the racing Alfa by the Shell’s engineer Somazzi, Enzo Ferrari’s longtime friend and official supplier of his Scuderia. It was mainly composed of 97.5% methyl alcohol, 1.5% distilled water to slow down corrosion and finally 1% castor oil to lubricate the compressor lobes. The doses must be absolutely perfect and balanced so as not to risk damaging the engine, entirely manufactured in magnesium, compromising reliability and performance. Quite empirical the test to have a perfect mixture: it consisted simply to dipp a piece of magnesium into that mephitic concoction and then waiting a few hours to see what was going on! Furthermore was necessary very hot spark plugs for turn on the engine with its electric starter and heat it several minutes with traditional gasoline while an expert mechanic “worked” on the carburetor. Once the optimum temperatures were reached, the residual petrol from the tank was emptied and methanol, highly flammable, was put in with thousand precautions; immediately after it was necessary to replace the spark plugs with others more or less cold according to the circuits, to avoid to perforate some pistons, followed by another calibration to the carburetor and … away in the clouds of stinking smoke and a excruciating noise! Returning to the pits, reverse procedure: empty everything, refit normal petrol and normal spark plugs and then continue to run the engine for a general cleaning for avoid deposits of corrosive residues inside. Off course the procedures were very complex, but not so far from the current ones.

The drive. 70 years have passed, but it’s always exciting! I can talk about it because I was lucky enough to drive the 159 several times thanks to the courtesy of the Alfa Romeo Museum in Arese, maybe moved by my passion and enthusiasm. Already attending the long preparations for starting the car to the track is something exciting. Meanwhile, the mechanics who work around it; I remember them all with affection and friendship, and in particular Bonini, a great test driver, Maurizio Monti his disciple, the long-limbed Rigoni,… their expertise and harmony were exceptional. They were part of the old guard, of that intangible capital that Alfa has been the custodian for a century. A capital made up of traditions and excellence in which the elderly transmitted ancient knowledge and past experiences to the youngest so that the traditions of the manufacturer were not lost in its evolution. Enzo Ferrari said that “in Alfa there were mechanics who knew how to sew gloves for the flies!!”.

Sitting in the driver’s seat, however not uncomfortable, on that light velvet seat utilized by illustrious asses already inspires not only respect but a lot of awe. You hold a huge wooden steering wheel, the one that held Fangio, the one with which he won the World Championship, … and you realize that you are a sacrilegious! I was sitting on the legend, on a car whose emblem on the radiator contains exhilarating stories of men and challenges. But I am immediately awakened by the incitements of mechanics: “Stefano go !!, leave immediately, come on, don’t make the spark plugs dirty, ..!” : It is easy to say; gearbox not synchronized, accelerator in the center, between clutch and brake, with right leg and foot trembling, pulse rate to thousand, and then that powerful rumble that is released from the exhaust. Around, people get their ears shut while the 159 flies away with the rear tires that inflate with acceleration and centrifugal force. It’s went, now we are alone, or maybe not; there is too much history in there. A nice “doppietta”, not easy because the clutch is a little tough, but the gearshift gears flow away with a monstrous torque and the speed is really remarkable. We are in Monza, right where this legend was born and raised, where the 159 has always won; the track runs away but the pain comes to the Campari braking (bend name), in fact the first time I go straight. The brakes, or rather the retarders, are certainly not reliable: but how could they drive this car? But then the more laps, the more you learn and the more you get used to that hard but safe steering. I brake, or rather slow down earlier and accelerate earlier; slight drift and off again in acceleration. The rip-off is that the more you drive this war weapon, more you learn about it and “she” becomes even more familiar, with its grumpiness and its cheerfulness, and at the same time you realize that you are always going a little bit faster. However, since I am not a great driver and I am not an idiot … it is better to go back to the pits and … to be speechless while continuing to dream … on shaky legs.

0 0 vote
Article Rating
Condividi su:
Those Quattro Pizzi at Arenella The Circuit of Castel Fusano
formerly the Circuit of the Empire