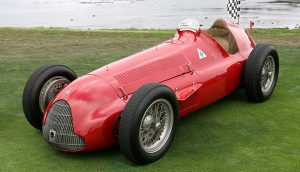 159 means only Alfa Romeo. Go on Google, type 159 and what will pop up is the car that came right after the 156, one of Walter de Silva’s masterpieces. At that time someone from the old school – from the good old days of Alfa Alfa – was still working at Alfa Romeo, and in designing this sedan of the early 2000s, his thoughts must have gone to another 159, the real one, the one of the World Championships of 1950 with Farina and 1951 with Fangio. In my opinion, it is the queen of the Alfa Romeo Museum in Arese; the one that was the symbol of the resurrection of Italy and of Alfa Romeo.

Italy, like Europe, in 1946 was devastated by the damages of the Second World War. There were no more factories: destroyed by the bombing or equally ransacked by the retreating Germans and by the occupying “allies”. 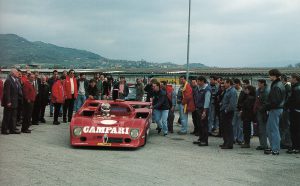 Alfa Romeo fared no better. Essentially, destroyed in 1943, it started to manufacture anything and everything to survive, from structural work to gas stoves. But a group of employees, managers and workers, with a lot of team spirit, initiative and a lot of affection for the Company, as well as with national and professional pride, qualities that are now completely lost, managed to prevent the theft by the Germans of technical and sports equipment kept at Portello. It was a secret, adventurous and impromptu operation. Together with other cars and many projects, some 158 cars of the ’40s were hidden in Orta and with several and major improvements they allowed Alfa Romeo a prompt and immediate successful return to racing effective from 1946. The 158 cars ( = 1500 displacement with 8 cylinders), already designed at the end of the thirties by Gioacchino Colombo and Eng. Massimino, were renamed 159 since they had a more powerful engine (it reached up to 450 HP at 9,500 rpm), new Roots compressors, enhanced brakes, and boasted multiple improvements and updates. Right from the very first races, they won on every track, giving back to Italy a good chunk of its honour.

I was always fascinated by this car, certainly similar to the Maserati and Ferrari cars, but with something more than them…. a historical legacy perhaps, but Maserati had it as well. Ferrari and Lancia did not yet, and Lancia left the races transferring every aspect of its sports department to Ferrari. 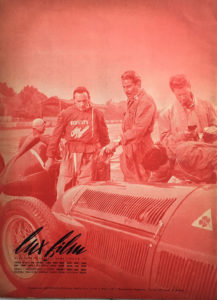 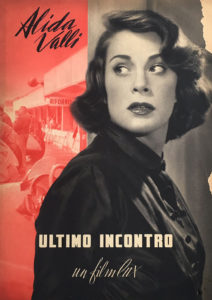 Maybe it was Luigi Fusi who let me witness the restoration of a 158 for the new Alfa Romeo Museum in Arese, entrusted to the skilled hands of former Fangio, Sala and Delle Donne’s engineers, and meanwhile he would tell me tales and tales about it, or maybe it was the black and white 1950 film by Amedeo Nazzari and Alida Valli “Ultimo Incontro” that had struck me a lot. And certainly also the long, meticulous refuelling and starting procedure of that fascinating racing car. About the fuel. It was made up of a sophisticated smelly mixture of methyl alcohol, distilled water (to avoid magnesium corrosion) and castor oil (to lubricate the compressor lobes). 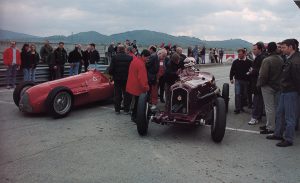 Traditional fuel and hot spark plugs were used to warm up the engine; however, once the right temperatures were reached, methanol and more or less cold spark plugs were used depending on the racetracks. Antonio Delle Donne then slipped in the starter, while Sala (known as “il Saletta” because of its diminutive stature) and Bonini (another historic Alfa test driver) played around with the carburettor. After some mechanical and gear rustling, a sharp and lacerating roaring would emerge, emanating from the double exhaust together with a blue cloud smelling of castor-oil. It was Chanel No. 5 for fans, a cause of deafness for me!

Often, the Alfa Romeo Museum, in order to get its cars to move around safely, sent them to some events of the Italian Alfa Romeo Register, the Riar, also with the goal of building up the prestige and image of the events it sponsored. In the ’90s, during a rally in Umbria with a stop at the Magione racetrack, we found some Arese Alfa Romeo museum’s racing cars ready to race: the P3, the 159 (!) and two 33s – respectively 8 and 12 cylinders – under the care of mechanics Monti and Rigoni together with Mimmo Magro, the Museum Director. 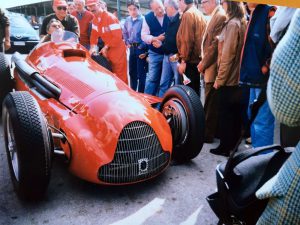 I had just finished a few laps with my 1932 8C Monza when Mimmo said: Go for it Stefano, race a few laps. We have already warmed up the engines….. I thought he was joking, but they had prepared this surprise just for me. I headed straight for the 159, but Mimmo stopped me … no this does not work, we’ll see later. So, right away I climbed on board the P3, a car I was already familiar with having raced with it more than once in Monza, at the Mas du Clos, in Vallelunga, but these are other stories. The car, I remembered run pretty well, even if not very straight due to its front-end issues. Then the 33s, beautiful but too “modern”, with tires that seemed made of wood by how old and dangerous they were, so… again I found myself at the pit stop, where several people, including a few Riar members and passers-by attracted by the noise, greeted me with surprised faces: “And who is this?”

And right there, ready, just below the lights of the pit lane, the 159 waited indifferently, strong in its glory and fame. Standing around it with their traditional light blue suits were Monti and Rigoni, and all the others in a religious silence. I was so thrilled, my legs were shaking, I even felt like I was offending the memory of Nino Farina and Manuel Fangio. I did not feel worthy of putting down my rear on that seat of greasy beige velvet that had already hosted the heroic one of World Champions! I was wasting time, but a strong push from Mimmo and the repeated reminders from Monti that the car was ready and had to start right away, in order for methanol to run through the system, given that it is highly corrosive.Go! Go! Slowly, but go, just try not to break it and watch the rpms! 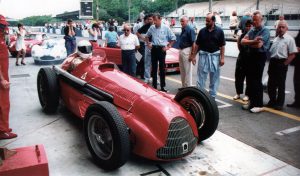 I climbed on, I sat down and I thought I was dreaming, but they screamed for me to go, so I shifted to first gear, pressed the gas pedal to the metal, a smoky squeal of tires for the entertainment of everyone watching and off I went, with tires swelling thanks to the acceleration and the beast took off wagging left and right! Second and third gear, hairpin bend to the right in second gear, followed immediately by a hairpin bend to the left, pressing down on the gas, the 159 slowed down, but recovered well with the progression of the acceleration, and the racetrack turns appearing right below stands filled with spectators got me a little too excited and I took the bend that led into the straight away a bit off centre, but nothing happened — it was a miracle! I immediately pressed the gas pedal to the fullest and what followed was huge noise… like that noise of a fighter jet! A great car, easy, sincere, light, very powerful. A real Alfa Romeo.

I passed in front of the pit stop and I pretended not to see Mimmo and Monti that gestured for me to slow down … but I couldn’t do it. The more laps, the more you gain confidence, and the faster you go. At the next lap I saw a clear gesture: Mimmo’s two hands close to each other, with thumbs and indexes forming a circle and indicating real threats. A clear and rather painful message! I understood right away, and I slowed down considerably, but I enjoyed another victory lap, dodging Monti that had placed himself in the middle of the racetrack like a police officer, and I enjoyed the applauses as I returned to the paddock feeling very proud. Once off the car, I could not stand, my arms and legs were shaking. 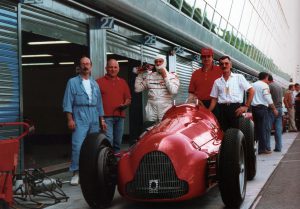 Another memorable day was waiting for me at the Autodromo di Monza in 1998, on occasion of the “Auto Italiana in Pista” an event organized by the Riar, Registro Fiat, Lancia Club, Ferrari Club Italia and the Registro Maserati. In Monza there was so much to see, the most beautiful Italian race cars and among them the ones that stood out were the famous Alfa from the Museum, parading their beauty. Many thanks to my old friends Mimmo, Maurizio, and Sandro – legendary Alfa Romeo men, part of the real Alfa Romeo – for the flattering gift you gave me. A few laps on the 2900 Le Mans – a work of art of the Touring – and on the spider 2000 Sportiva to feel the racetrack and then… there it was again, the small 159, ready to remind many enthusiasts of the heroic times and epic battles fought on that very same track. 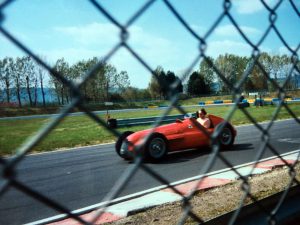 A burning start. I felt confident and I ended up right in the middle of the grass at the Campari turn, right where the great Champion lost his life. Fortunately, no one was around to witness my first silly manoeuvre that happened again when I got there too fast, then I quietly reached the pits to reassure everyone, and off I went again. This time everything worked out great, the track was full of Ferrari BB512 cars and Dino SP ones, a few Maserati A6 GCS, Alfa GTA and GTAm ones ….we exited the big curve at full speed and next to me there were two BB512s, one in Les Mans version, but they seem still to me. My Alfa Romeo overtook them with no effort and up to the pause after the pitstops there was nothing to do …. the drum brakes, although powerful, did their best, meaning very little, so they passed me again, but when facing the curves it was a huge pleasure! Many other cars, despite being famous, seemed like scooters. I was exaggerating and my prudence was decreasing, it was better to return to the pit stop, even if with sadness. I caressed that steering wheel and thanked its mechanics. I felt that we would likely never see each other again. Loved, forever, yes, but from a distance!