Enzo Ferrari always had a great passion, not only for journalism, which he had practiced in his youth, but also for the journalists themselves, often resulting in furious quarrels with them, which then, inevitably, ended up on friendly terms with a glass of Lambrusco and a plate of tortellini. In 1976 he published a book specifically for them, only a thousand copies which, however, never made it to the market. Today, it has not only become a real collector’s item, but above all it is of great historical and cultural interest for the opinions and views that the ‘Commendatore’ directed towards the most famous journalists of the time. Views which should be read carefully and that are astounding, considering their modernity and perspicacity, combined with an ironic shrewdness, which clearly stand out, through the same preface that we attach here. He even calls journalists “envied colleagues” to remember and ingratiate them, but he also doesn’t shy away from shooting some “darts” at them from his book Il Flobert. In homage to his memory and habits, the text has been transcribed in a purple colour, the way he liked it. 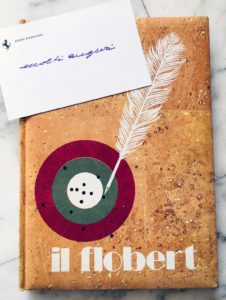 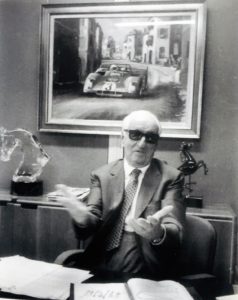 during the long waiting on Fridays and Saturdays, when the phone and the telex were late in giving me the news of the qualifying sessions, and on Sundays, in an attempt to calm the restlessness of the long-awaited rankings, I wrote this folder. They are simple notes, memories dedicated to friends from the printed press, in the wake of impressions received and episodes experienced. Sheet after sheet, they resemble those little letters that children usually put under their parents’ plate on Christmas Eve, even if there is a difference, because children are abundant in their intentions, but they always conceal what they think of their parents.
Thus, at my age, a child once again, I felt the overwhelming pleasure that incited me as a teenager towards journalism. A desire that I have never abandoned, even if certain tasks have brought upon me a great deal of criticism. Will you forgive me, this time? You won’t use your artillery against me, will you? Because I only own a Flobert dart gun, jealously guarded since my childhood and, these days, properly registered.

These pages are dedicated to the friends at the forefront, to those I usually met, to those who I frequented less or even only saw once; they’ve engraved an emotional trace in my memory. IT’S Impossible to mention everyone, but no one should feel excluded because it is precisely all of you, envied colleagues, that I think of with friendly sentiment and with regret for those who cannot emulate you, but can understand the ingratitude of a role that sometimes leads you to write that which makes more news. This is why certain inaccuracies, or packaged truths, have advised and advise me against denials or corrections that would normally be resolved for the benefit of the publisher. Hence, my aversion to interpretative interviews of my thoughts and the desire to receive written questions so as to answer in writing, taking advantage of reflective pauses that exist between the pronunciation and the graphic translation of the word.
In 1914 I was an errand boy for Luciano Zuccoli, author of “The Arrow in the Side” and now back in vogue with the film based on his novel “Divine nymph”. During that pre-election period, Zuccoli was director of the ‘Provincia di Modena’ and I dreamed of becoming a director like him one day. I then continued to delude myself with the football correspondence at the ‘Gazzetta dello sport’. Filler articles: Inter beats Modena 7 to 1.
In the 1930s I was Managing Director at the ‘Corriere dello sport’. It was a time when the sports newspaper came from Bologna. The president was Alberto Masprone, former centre-forward of Hellas and Inter, aviator with D’Annunzio in the squadron over Vienna.
I nostalgically remember those times and those collaborators, always arguing with me over the amount and punctuality of payments, and the sportsman Buriani, president of Virtus, who intervened in the recurring “arguments”. Nedo Nadi took care of the fencing news, fifty lire per article, while Corrado Filippini wrote about motor racing, ninety lire a month. The director, Roberto Pezzoli, was a football specialist. Then there were Barbacci, who dealt with athletics and swimming, Petroselli, boxing and Maggi, cycling.
During the course of life, automobiles prevailed, which were the third of my teenage passions along with the operetta, but the journalistic incursions resisted. 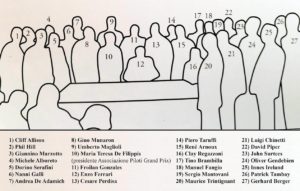 I continued, reading a lot, sometimes replying, getting angry at times. I have reached the age now where writing letters can once again be resumed. At the age of seventy-nine, as in childhood, one is moved by simple things, by facts and situations that seem irrelevant to most, but which instead contain the aroma of purity in their naivety. I have probably been a little demanding with you all. I also baptized you “Monday engineers”. A definition which, I must say now, is not mine. One day, the term came out of a discussion with Charles Faroux, a great French journalist and engineer. Irritated by some of his criticism, I had invited him to collaborate with me technically. “No, sir! – was the reply – It’s one thing to judge things when they’re completed, it’s quite different to pre-order and implement them. I wouldn’t know how to begin to replace you.” I concluded that even I wouldn’t have been able to imitate him.
Here are the letters.
As for me, I will continue to read all of you with equal interest, and sometimes, to reply to you. Allow me to nourish one of the first dreams of my long life and forgive me, even in the event that a shot fired with excessive ease by my Flobert air gun has hit a delicate part. The scratch of a dart does not leave a mark. And then there is the desire to join you for a few moments; you who remain creditors of all the good bestowed on Enzo Ferrari, even by speaking bad about him at times.
In a world polluted with fear, it seems nice to be able to still smile at our cordial contrasts, fuelled by human warmth and the love of sport.

The images and video used in this article are for illustrative purposes and belong to their respective owners. Il Flobert Copyright Enzo Ferrari 1976

0 0 vote
Article Rating
Condividi su:
1933, the film of a year of races. Once upon a time Alfa Romeo