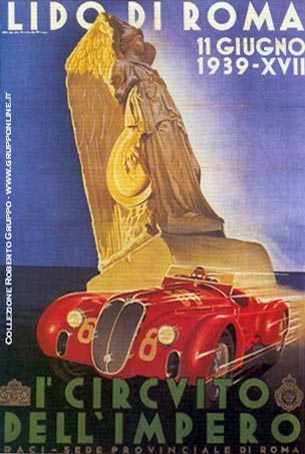 Once upon a time … even Rome, an ancient and multifaceted city, rich in history and traditions that by now, and especially in these times, have almost all been forgotten. It was a bright and luminous capital not only of Italy but also of cinema, fashion, sport, various elegant and social cultural events that the world then took as an example and reference.

And so here is the story of another aspect of an extroverted Rome, once also linked to car racing. Events that attracted many spectators and brought further contributions to image and modernity of a thousand-year-old city which then culminated in the ’60 Olympics.

From the ancient and extraordinary Aurelian walls (3rd century AD) which still proudly resist and which once surrounded ancient Rome to defend it from the barbarians, right between via Appia Antica (Porta San Sebastiano) and via Ostiense (Porta San Paolo and Piramide Cestia), proceeding just beyond the Baths of Caracalla, the arches of Porta Ardeatina stand out imposingly, from where a large and modern fast-flowing road, the Cristoforo Colombo begins. Today the busy artery that leads from the historic center city to the city of Ostia ends in a large square by the sea, right on the coast of Castel Fusano. It was designed in 1937 with the bombastic name of Via dell’Impero and was part of the magnificent and futuristic project of the great Universal Exposition to be held in Rome in 1942 in the area that has now become the immense EUR district (Esposizione Universale Roma, ex E42) built around the magnificent white marble buildings in full twentieth style, the result of the architects Piacentini, Muzio, Guerrini, Libera, Vietti, Banfi, etc.

Just in the area of ​​the coast of Castel Fusano, between the ancient pine forest and the new buildings of Ostia, the construction of a semi-citizen circuit was also studied. In the pine forest still exists, a perennial memory but in a total state of degradation, an avenue that bears this name, Viale del Circuito. Initially it was called the Circuit of the Empire and the first victory it was won by Carlo Pintacuda’s Alfa Romeo 6C 2500 SS Spider Touring from 11 June 1939, managed by the ex Scuderia Ferrari but registered directly by the Portello, of which he was General Manager Ugo Gobbato, through the newly selected Alfa Corse with the team principal of Enzo Ferrari. To follow in the ranking the others Alfa 2500 of the factory team of the drivers Calamai, Cortese, Rangoni, etc. all acclaimed by a large and enthusiastic crowd gathered on the balconies and along the streets of the new district of Ostia to applaud the daring drivers despite the winds of war that was at the gates.

Rome had no longer had an important speed race. Indeed, the last edition of the Rome Grand Prix was held eight years before, in 1931, which initially took place on the Circuit of Valle Giulia, then on that of the Tre Fontane and finally on the runway of the Littorio Airport (today dell’Urbe) on the via Salaria. The new Circuit of Castelfusano was quite fast with a long straightaway over the sea, entered the pine forest and involved part of the new town. It vaguely looked like that of Mellaha, in Libya, where the Tripoli Grand Prix was held. Immediately after the war, where the world was literally and tragically shipwrecked, the frenzied desire to return to life, to start again, and above all to smile again, created various initiatives including the car races that resumed in Rome in 1947 on the Circuit of the Baths of Caracalla, near the Colosseum and the Palatine Hill. The Ferrari 125 S won, the first car made by the famous manufacturer from Modena to be called by its name, driven by Franco Cortese. But in 1954, also in June and coming back on the Castel Fusano circuit, started the XIII° Rome Grand Prix, this time inside the pine forest, and the Maserati of Marimon and Moss were the masters. There was also a “certain” Fabrizio Serena di Lapigio on Ferrari 125, an unforgettable friend and brilliant future President of CSAI (Italian Automobile Sports Commission).

The Alfa Romeo – retired from racing in 1952 after winning the 1950 and 1951 World Championships with Farina and Fangio on Alfetta 159 – souldn’t certainly held in a lull on his already consolidated legend and past glories so, near XIII° Grand Prix of Rome, on the same circuit, and with great marketing intuition, organized a very suggestive event. Alfa Romeo arrived in strength to Rome giving ample space, static and dynamic, not only to his own production cars, but also to those that crowned his sporting successes on the runways all over the world by combining a high fashion show with the most beautiful names entrepreneurship, Roman aristocracy and cinema. Elegance and Alfa Romeo style, a combination that has characterized the house from Milan for years. And to watch today the films of the Istituto Luce or of the Incom Week or those old beautiful and a little yellowed photos of elegant people, actresses already beautiful in nature and not for surgery, of gentlemen all in suits, it certainly causes a smile but certainly also a lot of regrets. Italian style and excellence of a time gone.