The story of a wizard and a banana.

About 40 years ago, in the middle of the Tuscan countryside near Montalcino, the birth-town of the magnificent Brunello wine, I ended up by chance in a cave of sorts with a sign in front that said “workshop”. Inside, in the midst of filth, there was a little bit of everything: a disassembled old tractor, blackened engines of all kinds, even farming tools and a sleeping dog, all sorts of scents in the air and, in a corner, a rusty Rumi Formichino scooter leaned against a Guzzi 500 motorcycle without a wheel but certainly with a racing past.

It had yellow race numbers and a petrol tank on top of which stood an oil tank. Years later, a few expert friends told me that it was a Dondolino… But at the very end of the workshop, covered in dust, with flat tires and in a pitiful state rested an Alfa Romeo Giulia SS of an unlikely emerald green, gloomy and … horrible indeed. 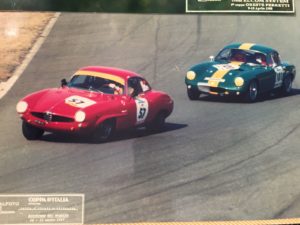 The “owner” was in tune with the overall style, but I felt an immediate attraction for that poor Alfa Romeo Giulia and I made a deal and bought it. I asked to load the car immediately on a tow truck and I brought it to Rome with me to Franco Angelini, nicknamed “the wizard” because in his tidy and sparkly-clean workshop, a true “atelier” of mechanical excellence, true miracles happened and unbeatable Alfa Romeos were born. For example, those of Ignazio Giunti, which were often better than the official ones from Autodelta or the racer “motorboats” of Giulio De Angelis, World Champion multiple times.

As soon as Angelini saw that car enter his sanctuary full of trophies and relics won everywhere, between GTAs and 75 Supertourism models, he started to swear in his typical and colourful Roman dialect so characteristic of him, threatening to call the health department, pest control department, transmissible disease department and ordered me ” de portà subito allo sfascio ‘sta banana fràcica ” [to immediately take that rotten banana to the wrecker]. In short, he did not want anything to do with it. 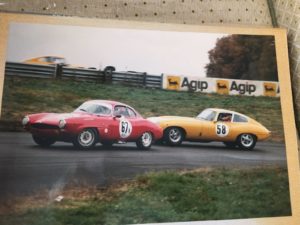 So I brought it to Felice Re, a nice and skilled Alfa Romeo mechanic with a workshop on Appia Antica. He disassembled everything that was left to disassemble, sandblasted it completely, repaired the various leaks, hammered the car frame, reinforced according to my instructions all the weakest points, welded a nice roll bar, painted it of a magnificent blazing red and we brought it back to Angelini to set it up properly and make it ready to race in the new Historic Car Championship. Once again I had to endure the swearing even if at a lesser degree (the great Alfa Romeo heart was starting to beat!): “prima de parlà magnamose du’ rigatoni poi vedèmo, voi nun capite un ca…volo, è mejo montà sulle nipoti che sulle nonne” [Before we talk, let’s go eat some pasta then we’ll see; you don’t understand sh*t; it’s better to get on board the grandchildren than the grandmothers] and so on and so forth.

But this new challenge was attractive to him and so was that beautiful, naked, eager car, which ended up under his magical hands. Not even a month later, while his workers were assembling all the mechanical parts suitably prepared for competitive use (lightening and holes on all sides), he summoned me urgently. The engine was on the test bench and he was waiting for me to turn it on. The first sounds: pa, pum pa, pa,pa, pum pa, pa, papà, pum… and in all that noise he said to me: “O’ senti ? me sta a chiamà !!” [Did you hear it? It’s calling me!] I looked at him puzzled. “Ma che sei pure sordo ?” [Are you deaf?] he asked. “Nun senti ? papà ! papà ! Me chiama papà !!” [Can’t you hear that it’s calling me daddy, daddy!] and in the meantime the newborn “creature” was crying at the top of its lungs running at 7,500 rpm! The next day it was already screaming at over 8,000 rpm and its power was approximately 160 HP! 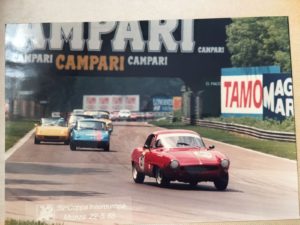 While Mrs. Carla, who lived upstairs, was screaming too, out of the window like a crazed woman in an Italian dialect that was just as colourful yet understandable, especially because of her tone and gestures: “Angelì !! so’ vent’anni che me rompete li cojoni, bastaaaa !!!” Nun ne posso più!” [Angelì, you’ve been breaking my balls for more than twenty years; enough is enough! I can’t stand it any more!]

A Saturday we travelled to Vallelunga to set the car up on the racetrack with Claudio Francisci, a fantastic Rome-based driver still gloriously active testing powerful prototypes. After a couple of laps, Francisci stopped the car and told us to close it in front of about 2 to 3 mm, place the inner tires at 2.6 and the outer ones at 2.4. What? Two more laps afterwards and the time went down by more than a second per lap and the tires were all four at 2.6. Eh, I know! The driver was fantastic but the Alfa Romeo Giulia was like an airplane. And Angelini’s exclamation while proudly popped the hood was unforgettable: avemo drizzato pure ‘sta banana [we straightened this banana too] obviously referring to the shape of the SS.

Another miracle by the Rome-based wizard whose banana (the Giulia SS) made him win another Italian Championship and numerous other ones under the flag of the Riar and the Campidoglio team. Those incredible wizards are no longer here, but the unbeatable “banana” is still on the racetrack. This Giulia reached France, won the French Championship and now is in England where she continues to enjoy amazing success. 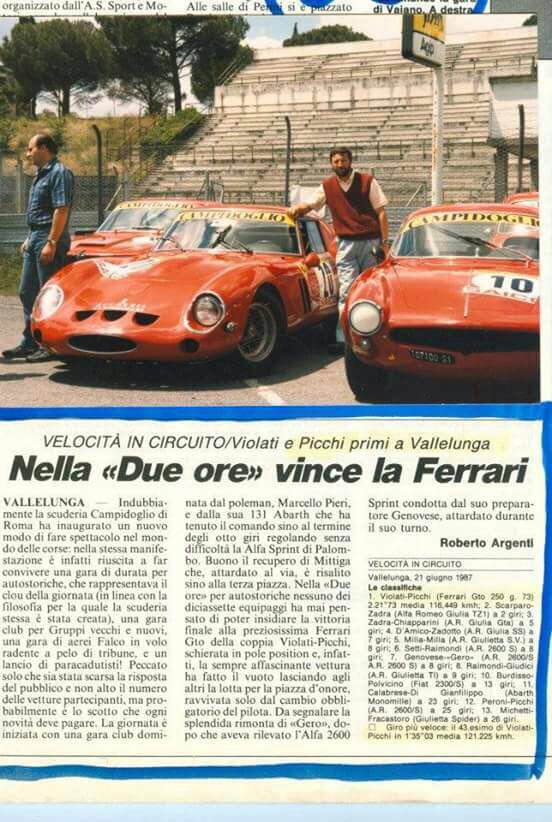 0 0 vote
Article Rating
Condividi su:
1939. From Massawa to Asmara on board the “Coloniale”. A life under the flag of the “biscione”