And Der Teufel became a legend…

18 July 1935 Despite the weather, the rain and the grey skies – almost as a bad omen – were the backdrop of the upcoming German Grand Prix at the Nurburgring. More than 300,000 spectators and the highest authorities of the Reich, including the Führer, crowded the grandstands and edges of the racetrack under thousands of flags with a swastika. The Germans were ready to celebrate the forecast German victory of the powerful Mercedes and Auto Union, an example of the most refined and modern German technology. The race, which hid subtle but clear political implications, was announced as the most important event of the year; the five Mercedes (Caracciola, Lang, Von Brauchitsch, Fagioli, and Geiger) and the four Auto Union (Varzi, Rosemayer, Stuck, and Pietsch) would race against the old Alfa Romeo P3 of the Ferrari team led by Nuvolari, Brivio and Chiron as well as against a few Maserati cars, Taruffi’s Bugatti and Balestrero’s 8C Monza in a long 500 km race.

The forecasts were obviously favoring the Germans and even the powerful Alfred Neubauer, Mercedes Sporting Director, declared to the press that Nuvolari had a great past but that present and future belonged to the drivers of the Fuhrer. 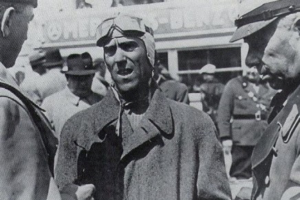 The race started under the rain.. Caracciola took the lead closely pursued by Rosemayer and by a Nuvolari …. absolutely possessed. Nuvolari’s speed and tenacity – he did not relent once – did not leave any breathing room to the opponents on a long, demanding and very tricky track. Rosemayer was not able to keep the speed and bumped against the barriers damaging the front wheels of his car. Tazio, in second position, managed to keep Caracciola under control and then overtook him with decision. And so Nuvolari crossed first the finish line, chased at a distance by nine German cars. The roar of the P3 fills the air and silence fell on the crowd and on the flags wilted by the rain. In the morning Nuvolari had told Ferrari: “I feel it; today I will win! Get the Italian flag ready.” However, no one at the Ferrari team took him too seriously! He always liked to boast. 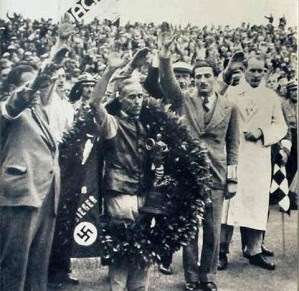 In the meantime the P3s of Brivio and Chiron drew their last breath and ended the race at the pit stop. At mid-race Nuvolari, first, stopped for refuelling and changing the tires. A disaster. Due to the hurry the gasoline gun broke and gasoline had to be poured into the fuel tank by hand; Nuvolari, furious, resumed the race driving like a madman!
The delay brought him to the sixth position and the anger unleashed the Mantua racer who, with fury and tenacity, caught up with everyone and overtook Stuck first, then Fagioli and then Rosemayer. From the pit, Director Ferrari gesticulated inviting him to be careful but Nuvolari answered with a rude gesture.

Nuvolari overtook Caracciola, in second position, who did not expect him and he reached Von Brauchitsch who, as soon as he understood that Nuvolari was just behind him, half a lap from the finish line, panicked. Losing control a few times, he did not handle the curves well and one of the tires – already worn due to the overwhelming power of his car engine – finally burst. There are only a few kilometres to go. Nuvolari got the lead, the speaker and the crowd fall silent, Hitler’s face, already pale by nature, became even whiter for the anger while the high authorities of the III Reich around him trembled in fear of the punishment. Nuvolari is leading, before Stuck and Caracciola. It is a moment of total panic. The organizers did not even have the Italian national anthem ready. But in Italy the radio and Istituto Luce immediately broadcast the exciting news of the great victory, so typical of Italy and of the fascist spirit. However, here it was mankind that won, and just that. And since then the Germans called Nuvolari “Der Teufel”, the devil. A devil who became legend. 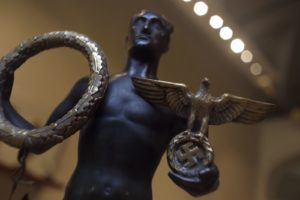 The Trophy given by Hitler to Nuvolari. Saved from the archive before it got lost, it is now stored at the Nuvolari Museum in Mantua. 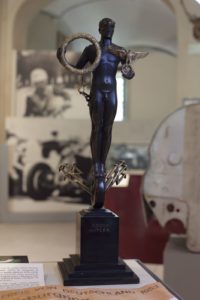 The images used in this article are for illustrative purposes and belong to their respective owners.
The video “Il Gran Premio automobilistico di Germania.” it is property of the Istituto Luce Cinecittà.