Great celebrations in Sicily for the 90th anniversary of the Targa Florio in May 1996. The Automobile Club of Palermo, at that time chaired by Tullio Laurìa, organized for the occasion a historical re-enactment of the mythical Sicilian race on those same hairpin bends of the Madonie that saw 10 times the stunning success of Alfa Romeo (see Note 1). It would have been a real speed race dedicated only to historic cars. 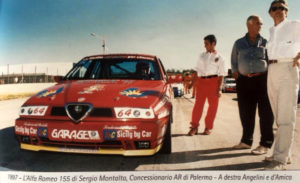 With a dear old friend from Palermo, Sergio Montalto, a strong and experienced car and motorcycle driver, we had already shared several races on historic cars, such as Alfa Romeo, Giulietta and GTA, but especially the Italian Super-tourism Championship (CVIT) on board a 155 former Nordauto prepared by the “magician” Franco Angelini. We were pretty good and we had always achieved good success.
Sergio called me one evening and, in a tricky and devious way, began to talk about the historical Targa race. “What do you think? Do we want to participate in the race? You know, just for fun: we meet for lunch at Uncle Antonio (Antonio Pucci) in Calcatelli, then we leave again, without hurry … What do you think? Maybe Nini (Vaccarella) will join in too.We could participate with the GTA or the Giulietta SZ (mine, of course!) then if you want, we could go a little to the sea and take a boat ride to the Aeolian Islands, think about it, it would be nice! 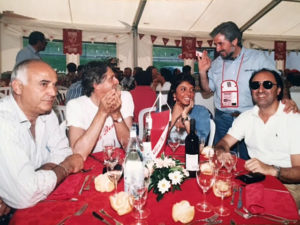 And that idea began to enter my mind, arousing renewed enthusiasm and euphoria. And finally those words convinced me to participate. But not with the GTA or the SZ, that even on those roads, in 1962, run a great and legendary race with Vito Coco and Vincenzo Arena (see Note 2).
It was the 90th anniversary of the Targa Florio and in my opinion we needed a car that could not only represent Alfa Romeo in a worthy way but above all the daring drivers of those distant times. The 1932 Monza 8C car was the right choice. The one that won in 1932 and 1933. Sergio could no believe his ears and his enthusiasm was out of control. He almost stammered … but, but, but, could that car race? Yes, it could, but in the meantime he convinced me. 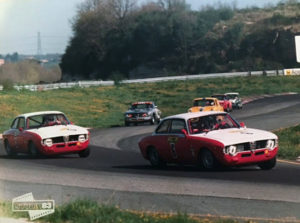 I brought the car to Angelini, here in Rome, for a general inspection and I had to listen to the usual litany of the usual ritual comments: “but throw it away”, “it is better if you use a younger car”, “you will hurt yourself”, “moreover you do not see well”, and so on and so forth. [“ma buttala via”, “è meglio montà sulle nipoti che sulle nonne”, “te fai male”, “neppure ce vedi”, ecc. ecc.] But I had to endure that in order to have the vehicle in good conditions! Then car on the truck, ferry to Civitavecchia – Palermo, rough crossing and finally Sergio with Carabinieri escort ready at the harbor the next morning to welcome the “antique”.

We brought the car to Garage Italia, Sergio’s Alfa Romeo dealership, behind Viale Libertà, with a long tail of curious people behind. More oil checks, tire pressure, various bolts, a nice cannolo (pastry) with ricotta from Savia, suspensions (so to speak) and road test. On the narrow hairpin bends the car did not run properly and was unstable, the tires did not convince us, the brakes… better not even to talk about them . Once again running down to the over-equipped workshop. I immediately ordered by phone five Dunlop tires in the UK that would arrive the next day by plane; I went back down to the workshop and I saw with horror all the front end disassembled. I cursed for a long time and prayed to the holy souls of Jano, Bazzi, Fusi and maybe Decimo Compagnoni (see Note 3) to enlighten those young presumptuous mechanics who already put the bar on the lathe to reduce it and change the entire front geometry. 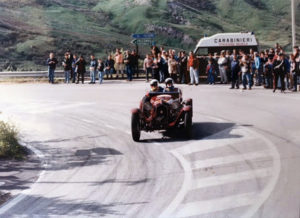 Sergio, understanding my worries, took me by the arm and took me away with gentle violence; we went to dinner in Mondello, by the sea, where we found two of his very nice women friends and I put aside all worries. We spent a wonderful evening and I went to sleep, Sergio instead went back to the workshop and – I found out later – he also started working on the 8C car. The race would be held two days later but the cars had to be present the next day in Piazza Politeama for the punching.
As soon as I woke up, I ran to the workshop too, the car was on the lift and they had just checked the wheel alignment. But the engine and brakes were hot!

Sergio went to test the car not far away … on the hairpin bends of Monte Pellegrino, the last race by Nuvolari and exercise track for Nini Vaccarella (see Note 4). In the morning, in fact, while I was shaving at the hotel in Villa Igea, it seemed to me to hear familiar roars …. But I could not think of so much boldness almost in the middle of the city. I thought it was a Harley Davidson without silencer. But it is known that in Palermo, the city of the Florios and the Targa, everyone still turns a blind eye, and maybe two, in front of these noisy shows.

He told me that, according to him, after the care the car was running much better, and only the brakes had to be adjusted. I was a little skeptical, since the leaf springs were set up in Bassano del Grappa by Toni Berto and Francesco Bonfanti and when on the road they worked very well.

We ran to the punching, we arrived at the last moment. A crowd of people admired the cars enthusiastically and then cheered at the thunderous arrival of the 8C car, escorted by two Carabinieri motorcyclists, the car greeted all emitting fumes smelling of castor-oil with yellow flames coming out of the exhaust. I felt like I had entered a madhouse. 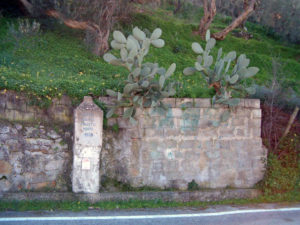 At the start line, all dressed with fireproof overalls and helmets, I felt very ridiculous and silly. Overalls, helmets and the whole body outside the car, you can well imagine what kind of protection I had! Soon, the race began. Special starter was Nini Vaccarella, a hug, which I considered as a final farewell, and we started. Under the tunnels of the motorway that connects Palermo to Termini Imerese, the 8C car, at 180 km/ hour, made a deafening noise and it was a real hazard for the “normal” cars that, minding their own business, started to zigzag, intrigued and distracted by the noise. At the stands of Cerda was the real start line; a handshake between me and Sergio and … go!
First curve and first skid, a second one immediately in Cerda to show the public all around, as in the past, of what kind of stuff we were made. And the hairpin bends, villages, hamlets, trees, land, sea and the sky flowed with Sergio screaming: here Tizio died, here Caio smashed, here I destroyed the Stratos, and I couldn’t listen to him anymore. My arms and back were stiff, but the car was working perfectly and I felt like I had gone back in time. Then Sergio started driving and the situation changed dramatically. We overcame like madmen cars that were ahead of us. That was his home; he drove those hairpin bends at Caltavuturo and Bivio Scillato as if he had driven them every day, and sometimes even counter-steering to excite the crowd on the roads and terrify me. I was sure to end up at the bottom of a ravine… I even thought: “Who knows if they will put a memorial stone in the name of d’Amico?” Since there was already the memorial stone in the name of Masetti. 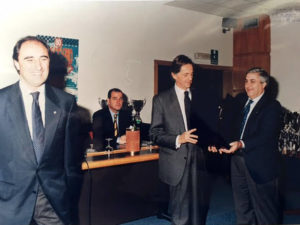 But we arrived at the end very tired, with sores in the hands, we ranked sixth and first in our class, ahead of Porsche, Alfa and other cars much more recent. Not to mention cheers, prize-giving and the Silver Cup of the President of the Republic that I treasure with great satisfaction and pride.

2 ^
The Vito Coco and Vincenzo Arena’s Giulietta SZ with No. 8 chassis, Scuderia Etna, that participated to the 46th Targa Florio, in 1962, where it ranked 7th, achieving a excellent result and ranked first in its class.

4 ^
Tazio Nuvolari at the uphill race of Monte Pellegrino. April 10, 1950. It was the last race for Tazio Nuvolari, already tried by cancer, driving in Cisitalia. He died in his Mantua three years later. Vaccarella tells that, his training camp was that uphill road and from there his fame and his amazing driver career had started.