This is the title of an article dating back a few years ago that appeared in the Piccolo di Trieste newspaper. A great article on history and heroism, unfortunately forgotten, of our seamanship, but also of Italian genius and Alfa Romeo.

“The Decima Mas had used it over seventy years ago in desperate and fearless coup de main against the British fleet. […] The soaring bow, the wooden hull, the Alfa Romeo engine and the two counter-rotating propellers of the mobile stern drive to get through port barriers; the first in the history of the navy.”. During the war, the “barchino” (small assault boat), or rather the M.T.M. (Modified Tourism Motorboat, or simply ‘M’ for those working in the sector) carried over 300 kilos of explosives in the bow and was designed to collide and shatter at maximum speed against the targeted ship. And what about the pilot, you might say? The pilot, or rather the quasi-kamikaze on duty, was one of the two hundred men from the Decima who, during the last meters heading towards the targeted ship, at over 60 km per hour, blocked the rudder and pressed the ejection seat button, along with a raft, which launched him into the sea. It didn’t always go well. But the motto of the Decima was “Homeland and Honour”… We little ones want to strike directly in the heart and what constitutes your greatest pride …

In 1991, during the celebrations of the delivery of the combat flag to COMSUBIN (Comando Subacquei ed Incursori – Command Divers and Attackers) the President of the Italian Republic, Francesco Cossiga stated “… roughly 200 men who served in underwater and surface assault vehicles sank or rendered unusable over 38% of the enemy military ships and 15% of the merchant ships … “

This barchino, found in Trieste, formed part of Commander Junio Valerio Borghese’s division and in the early post-war years it was modified by the British military, obviously removing the explosive charge, into a comfortable four-seater tourist boat with windscreens and used several years for recreational purposes. Renamed Cicala, it remained in use by the Civil Engineer Department for controlling port facilities until the early 1960s with its brilliant Alfa engine, always powerful and perfect, and was eventually abandoned and forgotten in the Porto Vecchio warehouses. It has now been relocated to the Museo del Mare museum in Trieste; yet again abandoned and waiting for restoration work which will probably never be carried out. 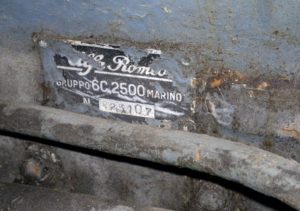 However, the story of the M.T.M.s is actually quite fascinating. In 1935, in the midst of the Ethiopian crisis, after numerous British warships were displaced in the Mediterranean, the Italian-British relations seemed to have reached a breaking point. As a result, the idea of explosive fast motorboats, transported by seaplanes, was launched. It was conceived by Duke Amedeo of Savoy, Air Team General, who passed it on to his brother Aimone, Division Admiral, who in turn made it technically feasible. The period was of great international tension, particularly in Italy (the unfair sanctions) and the Navy, like the other divisions, were constantly looking for any type of new weapon that could fill the gap, or at least reduce, of the incredible state of scarcity and obsolescence of our armed forces. 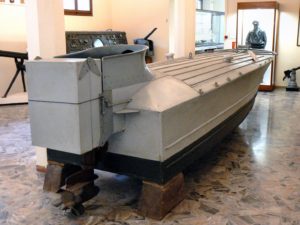 Significant problems arose in adapting the planes to transport the motorboats, right from the initial experiments. As a result, the design and construction of some autonomous prototypes was entrusted to the Cantieri Baglietto in Varazze. The boat, which underwent numerous and significant changes during the various tests, was made of wood with a corner hull and two internal bulkheads which housed both the Alfa Romeo 6C 2500 engine (90HP and 4400 rpm), similar to the auxiliary one used by the MAS, and the petrol tanks. It had an autonomy ranging between 80-85 miles at a speed of 32 knots (roughly 60 km/h!). This modern, light and powerful engine, transformed for marine use, which derived from the automotive series, was state-of-the-art technology at the time as were the transmission components and two counter-rotating coaxial propellers (to allow greater stability and directionality with the rudder locked) whose stern drive was foldable at the pilot’s command in order to get through any port barriers. A brilliant patent, still in use today, created by C.A.B.I. in Milan (Engineer Cattaneo), yet at the time covered by military secrecy. After the war ended, and was lost, it was “taken”, like other Italian patents which became prey to war, by the victorious allies, from the United States to Sweden, which by the way turned out to be the success of the Swedish Volvo Penta. The bursting charge in the bow consisted of 330 kg. of a Tritolital bomb while other small explosive charges were positioned at the stern which, at the moment of impact against the side of the enemy ship, operated by a mechanical device (“palmola”), also located in the bow, exploded by cutting the hull into two parts. The front part with the large charge sank and exploded underwater at a predetermined depth obtaining the maximum destructive effect right under the hull of the attacked unit. In the event of the device’s failure, the explosion nevertheless took place as soon as the charge touched the generally low bottom of the ports. The final, and most significant, test of the boats took place at the Idroscalo in Milan on March 1, 1941.

And let’s get back to the reckless pilot! Catapulting him into the sea, at full speed, between 100 and 200 meters from the target after locking the controls, was managed by unhooking a special raft float that made up his backrest on the boat. The pilot, in a diving suit, swam to reach the raft and laid down on it to try to limit the force of the shock wave from the explosion and then… and then he raised his hands in the hope that he wouldn’t be shot, if they hadn’t already started shooting! 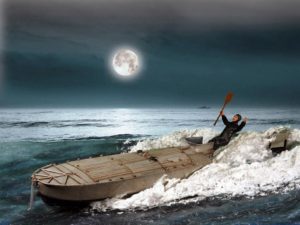 Their first action in combat took place in Crete, at the British base in Suda, on March 25-26, 1941 where the cruiser York and the oil tanker Pericles were sunk. The incursion in Malta on the other hand, in July ’41, carried out with the first prototypes of the boats (M.T.) was a total failure caused by their immediate sighting with the then new radars and by the instability of the sea, even if only slightly rough. Other attempts (in Valletta and Malta) were similar failures which caused a halt to their use in surprise attacks. Some heroic war actions by the M.T.M. were still carried out in 1944-45 by the X Flottiglia M.A.S. from the Italian Social Republic (R.S.I.) Navy against Anglo-American units. Many pilots perished in the heroic actions, particularly in Valletta, all awarded gold medals, while others were taken prisoners and some, very few, returned home. Several of these boats survived, unlike their pilots, because their use in combat proved to be a total fiasco, mainly due to the radars, with a useless waste of lives and energy. Immediately after the war they were demilitarized and alienated, by the A.R.A.R. (Residual Alienation Relief Company), and were then transformed into speedy leisure, and smuggling, boats.