The Società Anonima Scuderia Ferrari was established at the end of 1929, on occasion of a dinner at the Casa del Fascio offered by the Automobile Club of Bologna in honor of Alfieri Maserati and Baconin Borzacchini, stars of the final race of the season.

That cheerful and convivial event was organized to celebrate the Maserati brothers, car manufacturers, and in particular Baconin Borzacchini, holder of the world record for the 10 kilometers race, won on 28 September 1929 in Cremona on board of the powerful sixteen-cylinder Maserati.
In Emilia, land of motor sports and passion, and particularly in Bologna, the meeting points for motor sport fans and technicians were not Enzo Ferrari’s Emilia-Romagna and Marche representative HQ for Alfa Romeo, in Via Montegrappa, but Caffè San Pietro and Bar Follia located in Via Indipendenza. Surprisingly free of social barriers, considering the times, all the regular clients of the two coffee shops were close friends thanks to their common enthusiasm for motor sports and speed. Conversations, opinions, gossip, “Monday coaches” – as Ferrari called them – enlivened the noisy venues for days.

And when two wealthy hemp merchants from Ferrara – Augusto and Alfredo Caniato – started to became regulars of the two venues in market days and became passionate about the topic, they soon caught the eye of Enzo Ferrari who, as an excellent businessman and trader as he was, always tried to sell his already famous yet expensive cars. Indeed, one day Alfredo, the youngest of the two brother, fell for it and bought a brand-new 6C 1500 Super Sport car without compressor. Encouraged by Bruno Biagi, President of the Reale Automobile Club of Bologna, he immediately enrolled in the Three Provinces Race on September 1st, amazingly ranking sixth overall. It was an unexpected result that made him proud and enthusiastic, stimulating even more his hidden passion, sensed by Ferrari, fuelled further by the prize money he earned.

In fact, that evening of the celebrations honouring Maserati and Borzacchini, Enzo Ferrari, even if very young – he was just 31 years old – but always clever and keen, was sitting, not by chance, next to his wealthy client Alfredo Caniato and Mario Tadini who had ranked third on that same race. Tadini, born in Bergamo, was an elegant and wealthy gentleman, passionate about fast cars and other emotions, and he owned in Bologna one of the many clothing stores that belonged to his family. Ferrari chatted and chatted and described and while he was not a dreamer he was certainly a charmer. The idea of founding a racing team based on highly professional skills, very different from the almost informal ones that until then had inspired similar initiatives, was immediately defined in every detail: “If you put money into it, I will organize it,” he said. Chat and chat, charm and charm, and at the end, still “by chance”, the men found themselves in the office of lawyer Enzo Levi in Modena.

Tadini and Alfredo Caniato provided the money, while Ferrari, who knew very well how to take advantage of his considerable expertise and extraordinary influence, took care of the technical and organizational aspects. Riding the wave of their enthusiasm, the three men immediately organized a trip to Milan to meet the managers of Alfa Romeo at Portello, which, as it is well known, was not going through a period of great administrative stability. From the managers they immediately obtained the necessary reassurance regarding technical assistance and this made them certain that they could officially disengage themselves from the very expensive competitions and from the management of drivers, leaving to third parties the task of representing the Company. Alfa Romeo, in case of success by the newborn race team, would have made a good impression anyway. After all, it was still an Alfa Romeo car that would win. Instead, if they had failed or achieved only mediocre results, the fault would not have fallen on the Company but on these “naive”, passionate gentlemen.

As a cherry on the cake, Giuseppe Campari, a close friend of Ferrari, who the previous evening had been invited to dinner at Ferrari’s home near San Siro, after the songs and pasta dishes served by Ferrari’s wife, Lena Cavalleri, who was an opera singer, showed great interest in the initiative and expressed his intention to join the Race Team as soon as his commitments would have allowed him. For Ferrari this commitment was equivalent to an official recognition: the presence in his team of the popular champion from Lodi would have ensured not only Alfa Romeo’s certain and solid cooperation but also, and above all, significant sign-on fees!
Deep inside, however, what he wished to accomplish was to “show others, himself and Alfa Romeo – where he had worked for twenty years – that he did not live only by reflected light. … It was time to show my real strengths” (Enzo Ferrari, Libro rosso, a very rare edition never on the market, 1974).

“The Racing Team lasted for nine years and an umbilical cord constantly tied it to the Milanese company” (Enzo Ferrari, Libro rosso).
“Count Carlo Felice Trossi, President of the racing team since 1932, was a unique person. Fanciful and easygoing, he did feats that others would deemed impossible, both in life and on the racetrack. Tall, slender, blond, he brought into the world of motor sports a hint of curious, amused elegance…. And he was a great driver…. In a race in Biella, competing against Nuvolari, he was able to overtake him easily.” (Enzo Ferrari, Le briglie del successo, 1969).
“The Racing Team became a small independent department of loyal Alfa Romeo clients, linked together not only by competitive interests but also by technical and financial interests” (Enzo Ferrari, Libro rosso).

The Racing Team, which participated in car and motorcycle races with Rudge motorbikes, achieved resounding success but also moments of painful defeat. Drivers and technicians, all hailing from Alfa Romeo, including Bazzi and Jano, were the most famous drivers of that time.

“The recruitment of champions such as Campari, Nuvolari, Borzacchini, never compromised the training of other drivers, some of whom had a bright future ahead of them: Trossi, Brivio, Moll, Tadini, Pintacuda, Siena are the first ones that come to my mind, but I also remember Comotti, Scarfiotti, D’Ippolito, Carraroli, Ziegler, Bucci, Zaccarini, Bruno, Ramponi, Severi and many others. They grew up in the Racing Team” (Enzo Ferrari). 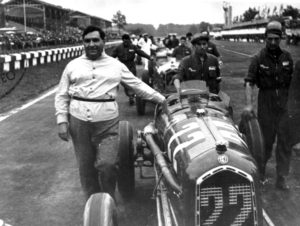 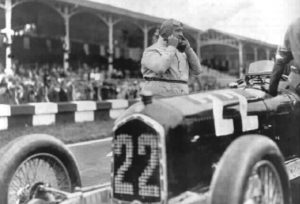 Probably the last photographs of Giuseppe Campari, who, without a moustache and smiling, acclaimed by his fans in Monza, is about to take his place on the starting grid as he wears his white helmet on September 10, 1933. He died shortly after in a bad day for car racing. On the same curve, the one that today bears his name and in the same race, Borzacchini, who was right behind him and shortly after Czaykowski died, too. Castelbarco and Barbieri were almost unharmed.

The relationship with Alfa was not always perfect. Indeed, there were “strong disagreements” due both to the arrival in Alfa Romeo of authoritarian Spanish Engineer Wilfredo Ricart and the Ferrari’s strong personality driven by a fierce “vocation for stirring up men and technical problems”. In 1939, Ferrari left Alfa Romeo permanently “without regret but with deep sadness”, and Ugo Gobbato, who was Alfa Romeo’s General Manager at the time, announced the creation Alfa Corse that would have incorporated and liquidated the Ferrari Racing Team by directly manufacturing and managing the race cars.

The historical headquarters of the Racing Team in Modena became an Alfa Romeo service workshop and Ferrari became an “employee” of Alfa Romeo, in the role of Manager of the new premises. However, with a man of such personality, the initiative did not last long and the fervent mind of Ferrari conceived the project destined to become a new great, exciting adventure. With the profits from the sale of the Racing Team and his personal severance pay from Alfa Romeo, Ferrari founded Auto Avio Costruzioni in Maranello, where he had “a small country house” (the 815 cars were born there) and in 1947 marked the birth of the Ferrari brand. But this is another story.

Browsing through the pages of the newspapers and magazines of the time, in particular those of the “Scuderia Ferrari” magazine, and later of the endless publications on the subject matter, Ferrari’s strong personality truly emerged, together with his undisputed charisma that made him the fine director and skilful strategist of the world of motor sports for seventy years. For us, he was not so much the most significant person in this sport from the era of the pioneers until the eighties, but above all the undisputed creator of the most beautiful pages of the Alfa Romeo legend.

August 1952
Dear Alfa Romeo friends:
Allow me to start this letter in this manner; a letter that I write to you after so many years.
The telegram I received from you today brought with it the fresh air of spring and in the clear sky I read, with disconcerting clarity, the entire book of our memories.
I spent twenty years with you. How many facts, events and men passed-by! Today I wish to honour everything and everyone.
Rest assured that I still feel for our Alfa the adolescent tenderness of the first love, the immaculate affection for mum!
Believe me.
Sincerely Yours, Enzo Ferrari

(Ferrari’s reply to the congratulatory telegram received from Mr. Quaroni, General Manager of Alfa Romeo for the first World Championship won by the Ferrari racing team with Ascari)

The images used in this article are for illustrative purposes and belong to their respective owners..