1939. From Massawa to Asmara on board the “Coloniale”.

More than 20 years ago, I spent an entire afternoon in what in the past was defined as the “Italian Eastern Africa”. Except I was not in Asmara or Addis Ababa but I was in Milan, near Piazza Cinque Giornate. I went to meet Gian Battista Guidotti, the true and only, Nuvolari’s co-pilot in the legendary and successful Mille Miglia race of 1930, the one one would race with the headlights turned off.

And I was in the company of Bruno Bonini, one of the seven famous Alfa test drivers and a pupil of Guidotti. They were called the “seven golden men”, or the
“magnificent seven” with reference to two cult movies of the time. They are longer here, as there are no more people like them, but I alive indeed is the charming and intense memory of that afternoon when, perhaps driven by a few too many glasses of the good Marsala distributed by Mrs. Guidotti, Gianbattista “left” for Africa. 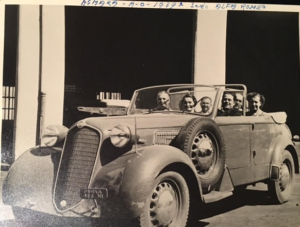 He opened a dusty album of yellowed photographs and … we too found ourselves catapulted on board the Umbria motorboat headed for Eritrea. The first stop was in Benghazi, Cyrenaica, to finally reach Massawa and deliver a few Alfa Romeo 6C 2500 Coloniale for our troops. The winds of war were closer and stronger. Guidotti had to test some of the cars and present them to the Duke, Amedeo D’Aosta, aka the Iron Duke, Governor of the Italian Eastern Africa and future hero of Amba Alagi.

From Massaua to Asmara, the route continued through Dogali where in 1887 the Italian troops of Colonel De Cristoforis suffered a heavy defeat by the Abyssinian troops of ras Alula and Guidotti told us that they stopped with the four 2500 C cars on the historic hill to pay honour to the fallen. Some people from Alfa Romeo and various Italian major figures left instead by train with the more comfortable “Littorina”.

He told us that in Asmara they were welcomed by the director of the beautiful local Alfa Romeo office and by the authorities of the city in uniform. It was a succession of invitations and magnificent trips in the surrounding area, including a really impressive trip with two Coloniale cars loaded with guests and related spouses, all the way to the ancient convent of Bizen on top of a mountain where a crazy monk blessed the Italian group and enjoyed the good food that obviously he wanted to “test” too.

The ” tout terrain ” vehicles never encountered a problem and they reached Lake Tana along fords and mule tracks apparently impossible to pass, but not impossible for the Alfa Romeo cars. The intention was to reach the Blue Nile. However, the commitments of the Duke of Aosta and the urgent military needs did not allow further adventures. 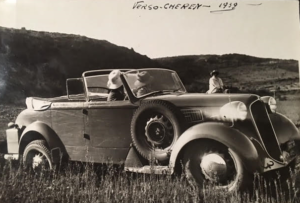 But how exciting it was to still hear the enthusiasm of the memories in the slow yet fluent voice of our storyteller and especially the passion he had for Alfa Romeo, which was the companion of a lifetime now at sunset, like that African sun that accompanied him on his journey. It was a parade of names of villages and Italian settlers who gradually hosted the Italian Brigade. Cheren, Nafca,… the “Da Peppino” restaurant with just a few rooms, telephone and telegraph, and then the magnificent citrus fruits of some Sicilian settlers, the welcoming Spampinato family, with two beautiful young daughters, one of whom was called Rachele… This was almost 80 years ago. Where are you, men of Italy, who sweated and cried in those distant lands leaving over there roads, houses, schools, hospitals, wells and aqueducts, cultivated fields, ………..

We left the meeting feeling truly touched. In our heart, we knew we would never see each other again. It was already night and I was cold. A strange dark night that seemed to want to claim even Bonini …. Instead, darkness claimed him in Spa, while he was driving a GTA for the Portello team. It claimed him, who had tested and approved those cars many years before. 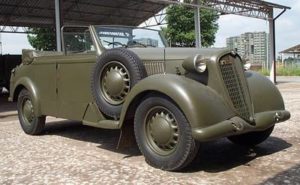 It was a sad end in 1940 also for the Umbria ship that had to sink itself in the Red Sea, in Sudan, not to be captured by the English ships, just a day before arriving in Massawa. It still lies there, 40 meters under water, a coral monument by now, and in its hold divers can still catch a glimpse – among various Fiat cars – of a few Alfa Romeo 6C 2500 Coloniale that never reached their destination. It is easy to feel yearning emotion when sliding a hand over the hood and discover the red emblem of Alfa Romeo still alive down there while all around hundreds of curious colourful fish pay homage.

0 0 vote
Article Rating
Condividi su:
Fuel and Adrenaline! A fill-up in wellness. The story of a wizard and a banana.