In memory of Cecè and Silvana Paladino Florio

In 1840 Vincenzo Florio Sr., at the height of splendor of the numerous and still profitable family’s enterprises, commissioned his Paduan friend, the architect Carlo Giachery, to create an elegant and modern residence near its “tonnara” called Arenella, between Capo Zafferano and the gardens of Villa Igiea, under Monte Pellegrino. 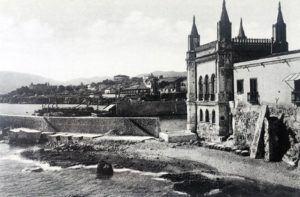 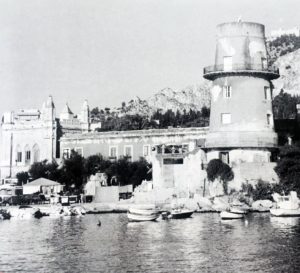 So was born the suggestive quadrangular Neo-Gothic building, called “Quattro Pizzi” by the Palermitans for the four cuspidate corner turrets (one collapsed following an earthquake), with a mill that was later added on the northwest side, built on a pre-existing watchtower, for grinding the sumac; from this it was possible to extract the tannin, one of the thriving Florio’s markets, necessary for dyeing of leathers. Today it is surrounded by “modern” buildings, mortified by the infamous building havoc of the Palermo of ’60s which took away a big part of space that encircle the city, leaving only the open sea in front of it; that sea from which, during the evening, returned the boats full of tuna and euphoria, not so far from the magnificent family’s yachts and merchant ships. 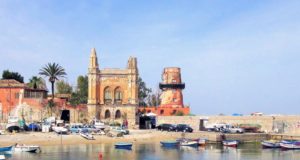 The romantic and suggestive construction, overlooking the Gulf of Palermo and taken up by many painters of the 1800s, hosted illustrious people including Zar Nicholas I and Zarina Carlotta-Alessandra Fedorovna, Emperor William III of Prussia’s daughter, to whom the court doctors had advised for her health, milder climates. This particular dwelling pleased the Zar so much that he made it reproduce in their summer residence in Peterhof, Russia, calling it “Arenella” in memory of Palermo and their friends Florio.

I always go to Palermo with pleasure, but in the past the house of “Quattro Pizzi” was for me a must. It was inhabited by two magnificent people, Vincenzo, better known as Cecè, and Silvana Paladino Florio, with their beautiful children and some elderly service people. Knowing my automotive passions, but above all, the one for Florio epic, she had introduced me to them another dear Palermitan friend, also dead, Elvira Sellerio, thirty years ago, cultured and refined publisher. The Paladinos, but particularly Silvana, because Cecè was almost always
in Madagascar, they were the true custodians of historical and cultural heritage of Vincenzo Florio Jr., the last of dynasty, the one who invented the Targa in 1906. Cecè was the youngest Lucie Henry’s nephew, second and beautiful wife of Vincenzo Florio whose first wife, Annina Alliata di Montereale died of cholera at a very young age. Lucie was a very capable and brilliant woman who did not she hesitated to sell many of his precious jewels in order to save what was the last symbol and the last home of the Florio family, the Quattro Pizzi. Cecè was therefore an acquired but preferred nephew of Vincenzo, who adopted and educated him in his image and with the same passions, and not by chance he appointed universal heir. 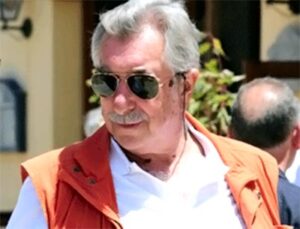 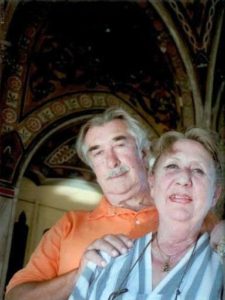 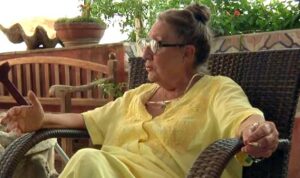 The interior of the house was and still is, a real museum, the temple of the Targa Florio and beyond. The large, bright, sunny and flowery terraces overlooking the sea and the balconies themselves with richly worked cast iron railings by Oretea Foundries, another Florio company, enclose behind them precious memorabilia and effort, memories not only of the Targa but of this legendary family. Moving under multicolored frescoes, in elegant and flowery liberty style, between rooms and corridors full of stories, loves, pains, past splendors and in any case of intensely lived lives, between shadows and twilight of fluttering curtains filtering the blue and strong light of Sicily, you always have the feeling of not being alone and seeing Vincenzo Florio appear from his study there, with the inevitable straw hat that looks at you sly but satisfied to be loved and still remembered. 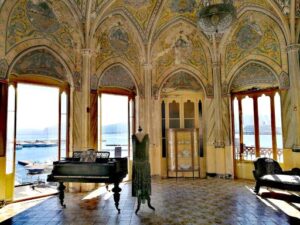 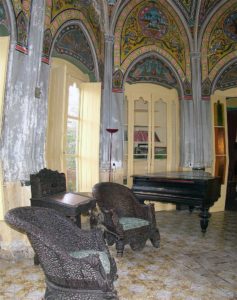 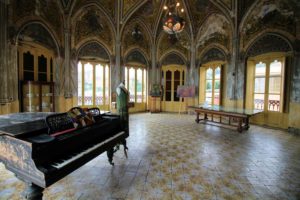 We wander in respectful silence, witnesses and observers of images and moments stopped in time, between windows full of nineteenth-century dishes with the Florio coat of arms or with the roaring lion, those with which kings and emperors have also eaten and drunk, and perhaps, in times not too distant, even some Targa drivers, invited to the house. In a long corridor, infinite memorabilia from the Targa stand out: a precious frame contains a parchment with the signatures of race drivers and characters from a Targa from the 1930s; two complete and perfect collections of Rapiditas, a precious and beautiful publication on the Targa, now unobtainable; bronze trophies, including some by Rembrandt Bugatti; rare yellowed images in old frames… 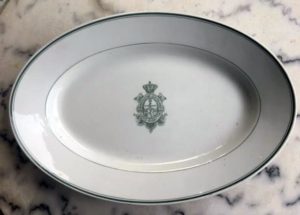 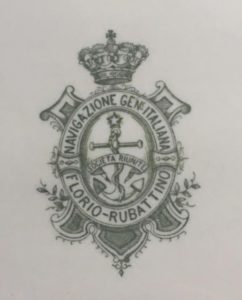 Ginori porcelain border tray of one of the Florio vessels.

The numerous paintings between Vincenzo Florio’s naif and futurism, hanging everywhere, from the kitchens to his study, simple and bright, photographs of a vanished Sicily, look and mock the amazement and emotion of visitor lost among memories and vestiges of so much history but also of so much pomp. We are increasingly amazed and certainly regretted…. regretted for times and men who no longer foresee and will never return. 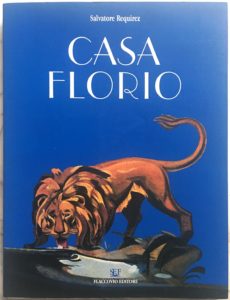 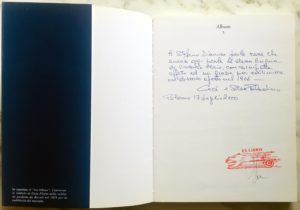