Ah! … randomly looking at old photographs. Sometimes, in a moment, you find yourself in a past that was not forgotten, but set aside and far away, yet able to awaken smiles and enthusiasm again.

Thirty-four years have passed, I just counted them. One morning, Mimmo Magro, a dear friend who was then Director of the Alfa Romeo Museum, called me: “Stefano,” he said, “a movie production asked us to lend them the 1750 for one day, the day after tomorrow, in Rome, in the Ostia area. I don’t have any available test drivers, but if you give me assistance on site, I will dispatch it,” I was about to leave for Libya for the usual, periodic local “political” issues. They were urgent matters. But I had the bad idea of asking what movie it was, who was there, where it was … in short, the usual things. It was a movie about Mussolini, with Claudia Cardinale. And I was hooked! I made myself immediately available. The next morning, I was at the appointment at the Ostia roundabout with Pasquale Squitieri’s assistant and immediately…. in action. But I did not go alone, so much curiosity and desire for some good “fooling around” had to be shared. I called Giovanni Gabrielli, a great car enthusiast, good friend and Riar member and Esso powerful attorney. Those were the days of “Cazzaniga” and he had several ongoing issues too. But, you know, to these calls you cannot resist so we passed our issues to the respective assistants and that was it!

The driver of the van, Monguzzi di Arese, if I remember correctly, was waiting for me to unload the glorious 6C 1750 GS on the Ostia-Torvaianica coast road, just where that fate-driven encounter between the Duce and Petacci took place. He, along with Secretary Starace, on board of the Alfa 1750 and she, with her mother and her brother, on board a Lancia Lambda with a flat tire. We obviously introduced ourselves to Cardinale, dwelling on smiles and congratulations, until a brutal “annàmo, forza, nun perdemo tempo!” [Let’s go, hurry up, time’s a waste!”] brought us back to our duty. Perhaps they mistook us for two cleaned-up and flirty mechanics. I started the car, and I gave instructions to the actor who played the part of the Duce (Mussolini), but that, unlike the first driver of Italy, did not understand a thing about cars. It was hard, but he was able to cover at least a hundred metres.
And then it was time for lunch, the sunshine was gorgeous, Cardinale was applying make up, the Duce – a little thick-headed – kept being trained by Squitieri and by us, uncertain about handing him the car but to be consistent with the plot … and we went to the near and legendary Vecchia Pineta building, a classic and wonderful work of the “ventennio” created by architect Vallot, and still a meeting place for those who love true spaghetti with clams! 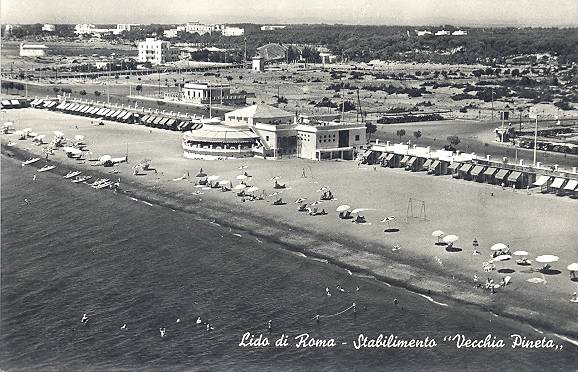 The spaghetti were excellent as always, but the idiots on the set in the meantime had started up the 1750 by themselves, obviously dirtying the spark plugs and causing problem for the engine. They likely thought that there was no gasoline so they generously did a fill up….
Great! We said. And the car continued to work great for about an hour then it was loaded again on the truck and returned to the idleness of its life in Arese while fatigued we headed immediately back to the office and worked until late.
The next day, I was called first by Mimmo then by the then foreman of the museum workshop, legendary Bruno Bonini.

“Stefano, what did you do? There’s gasoline spilling out from every screw in the engine! Under the car there is a sea of gasoline!” In truth we had done absolutely nothing, but the film makers had filled up the car with gasoline from the oil tank whose cap was located on the left side of the car. The oil sump and fuel tank were immediately disassembled; they had never been so clean. Thus an oil with a higher alcohol content was poured in, and the car, according to them, returned to its original condition and worked very well for years. We spent a nice day, Cardinale was incredibly beautiful, the movie was a success, it won many awards … and everyone lived happily ever after. 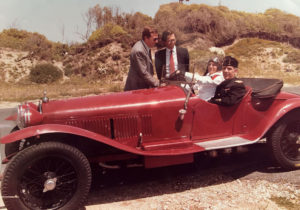 0 0 vote
Article Rating
Condividi su:
The years of the Dolce Vita (when they founded the Riar) Traveling here and there …